Some newer MIDI devices, and most personal computers, can send and receive MIDI over Bluetooth LE. MIDI over Bluetooth is included as a standard Bluetooth profile in MacOS and Android, and has recently been included in Windows 10 as well. The Bluetooth MIDI specification can be found on the MIDI Association’s site, and signs are encouraging for its longevity.

The MKR 1010, the Nano 33 IoT, and the Nano 33 BLE boards can communicate using Bluetooth LE. You can do it with some of the Arduino derivatives which communicate using Bluetooth LE as well, but these examples have only been tested with the ArduinoBLE library on the MKR 1010, Nano 33 IoT and Nano 33 BLE. SParkfun has a MIDI BLE tutorial that works with the BLEPeripheral library for some of the derivative boards like their nRF52832 board.

In order to use these examples you’ll need to include the ArduinoBLE library for use on the MKR 1010, Nano 33 BLE, and Nano 33 BLE. In the Arduino IDE, click on the Sketch Menu, then choose Include Library… then Manage Libraries. This will open the Library Manager. Filter for ArduinBLE, and you should see a library called “ArduinoBLE by Arduino”. Install it. Then you’re ready to start.

For more on Bluetooth LE, see Make: Bluetooth by Alasdair Allan, Don Coleman, and Sandeep Mistry, or this set of Bluetooth LE notes.

The Bluetooth radio protocol is made up of several application profiles: Audio, File Transfer, and so forth. In earlier versions, there was also a Serial Port Profile, which would enable a virtual serial port over Bluetooth. As of version 4.0 (also known as Bluetooth Low Energy or Bluteooth LE), the protocol underwent some changes. The serial port profile is no longer part of the protocol. Instead, Bluetooth LE uses a publish-and-subscribe model, in which some devices publish services and others subscribe to those services.

Characteristics can have different properties. They can be readable by a central, writable by a central, or subscribable. When a central subscribes to a characterstic, it’s automatically notified when the value changes.

Every device, service, and characteristic in Bluetooth LE gets assigned a Universally Unique Identifier, or UUID number. A UUID is a 128-bit number that’s associated with some data element. They’re used in many protocols. If you want to generate your own UUIDs, UUIDgenerator.net makes it simple.

Bluetooth LE MIDI, originally developed by Apple, is a new part of the MIDI specification. In short, it wraps MIDI messages in a Bluetooth LE characteristic.

To set up Bluetooth LE MIDI on a MKR 1010, Nano 33 IoT, or Nano 33 BLE using the ArduinoBLE library, there are a few steps you need to do. First, include the ArduinBLE library at the beginning of your code. Next, make an array of MIDI data and make variables for the BLE MIDI service and message characteristic:

You’ll notice that the service and characteristics both have UUIDs. These numbers are specific to MIDI BLE, and can’t be changed. The midiData array is used to make a Bluetooth data packet in the characteristic. The first two bytes will never change, but the last three will be the three bytes of your MIDI message.

Next, in the setup(), you need to start the BLE radio using BLE.begin(), then set the local name of the device. This can be anything you like. Then set the MIDI service as the advertised service, and add the message characteristic to the service. Finally, start advertising the service.

In your loop() function, you’ll wait for central devices to connect, and when they do, you’ll take action. You can write to your characteristic, and in this case, so can the central, since the characteristic is writable.

As you’ve done in the other MIDI exercises, you should make a MIDICommand() function. This is where you’ll actually change the characteristic, with new MIDI values.

Now that you know the basic steps of a MIDI BLE application, let’s see them in action. Here, you’ll duplicate the simple MIDI player that you made in the other MIDI exercises.

Let’s start with a simple MIDI melody player. We’ll use the Steve Reich Piano Phase melody that you used in the melody exercise. Start a new sketch just as you saw in the last section, by including the ArduinoBLE library, and setting up the midiData array and the service and characteristic you’ll need.

The song will be at 72bpm, and the melody will be the same as it was in the melody exercise, so add the following to your global variables after the BLE variables:

In the setup(), initialize MIDI BLE exactly as you saw in the previous section.

In the loop() function, you’ll wait for a central device to connect. When it does, you’ll turn on the builtin LED to indicate the connection.

NExt you’ll send a MIDI command to play a note on channel 0 (that’s MIDI command 0x90) at full volume (that’s 127, or 0x7F in hexadecimal). You’ll write the midiCommand() function later, but with this information, you can write the call to the function:

All the notes in this melody are sixteenth notes, which is 1/4 of a beat, so delay that long. Then send a note off command (0x80) for the same pitch:

Finally, add one to the note counter, then make sure it’s no larger than the length of the melody (12 notes). That’ll closes out the if (central) { block. After that you can turn off the builtin LED because the central is disconnected, and you can close the loop() function:

Now you need to write the midiCommand() function that you’ve called in the loop. It looks like this:

When you upload this, it will send out MIDI notes over and over. You can see that all you’re doing is updating the last three bytes of the characteristic with your MIDI data. The rest is handled by the central when it receives your data.

Here is the complete sketch.

Connecting The Controller to a Software Synth

You can connect via BLE to a MacOS computer using the Audio MIDI Setup application which is included with the operating system. Open it and look for the Bluetooth icon. Figure 1 shows the panel with the icon highlighted.

When you click the Bluetooth Icon the Bluetooth scanner will open up. If the above sketch is uploaded, the Arduino should show up as a new MIDI device, as shown in Figure 2. Click “connect” and the device will be available to all your MIDI applications. 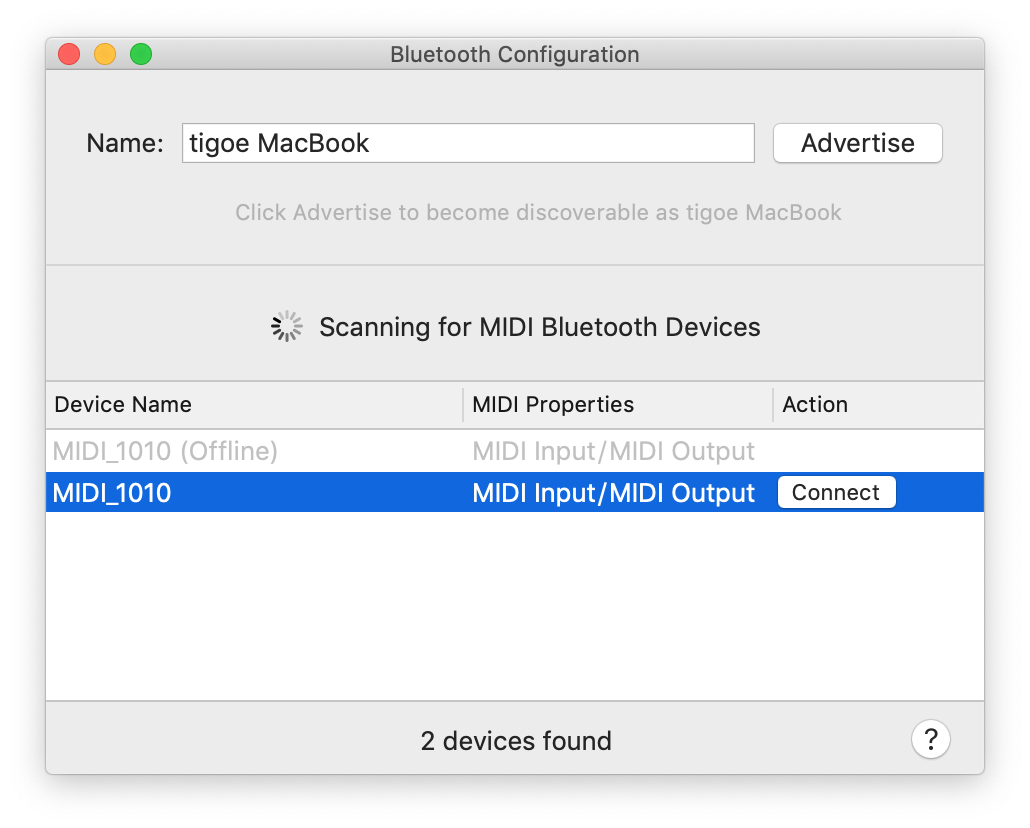 Figure 2. MacOS Audio MIDI Bluetooth Configuration panel. Your BLE device should show up in the list at the bottom, and you can connect to it by pressing the Connect button.

Even though your device is sending out MIDI, no one’s listening. If you have a Digital Audio Workstation like Ableton or GarageBand, then you can open it, configure the MIDI input to look for your Arduino, and the notes will play. For more on that, see this MIDI to DAW tutorial. If you’re not using a DAW, download a free MIDI synth player like Sforzando. You might want the Sforzando users guide as well. Then download an instrument file. This Yamaha Disklavier grand piano is pretty good, as are some of the other SoundFonts on that page.

Launch Sforzando. The first time you launch it, it should prompt you to set your MIDI input preferences. Choose your Arduino as a MIDI input. Unzip the sound files, then click Import in Sforzando to open the SoundFont files. Then you should hear the melody playing. Congratulations, you’ve got MIDI!

Now you’re ready to go on to making a MIDI instrument.

Note: you can also connect Android software synths to your controller using the MIDI BLE Connect app which you can download from the Android app store.

If you want to use BLE MIDI to send data other than noteon and noteoff messages, check out the ArduinBLE MIDI Control Change message example. This example uses MIDI controllers 14 and 15, which are undefined in the MIDI spec, so using them is unlikely to conflict with other controllers like pitch bend. This example shows how to send two analog inputs, but could be adjusted for any sensor inputs.

If you’re sending continuous control messages like this, you should be careful not to send too frequently. Bluetooth LE MIDI, at least as implemented on MacOS, does apppear to have some buffer limits, and sending control messages as fast as possible can cause problems. The example above limits sending to two control messages every 20 milliseconds, which runs reasonably well. You could tweak the interval time to suit your needs and your system’s limits.