Datalogging to a Server via WiFi

The examples described here log data to a server via WiFi using a network-enabled microcontroller as a datalogging client. These examples should all work on the network-enabled MKR boards, along with the Nano 33 IoT and other SAMD-based boards which have network capability. They can likely work on Espressif-based boards (ESP32, ESP8266) with some modification.

This collection includes ArduinoHttpClient examples along with node.js server scripts. There are also instructions for how to log data to a Google Sheets spreadsheet using Google Apps script, thanks to Arnab Chakravarty.

To make this work, you’ll need:

The central app in this collection is the DataLoggerHttpClientJSON client. It is an Arduino-based client, written for the SAMD boards (MKR boards, Nano 33 IoT). It reads a sensor, saves the readings in a JSON object using the Arduino_JSON library, and makes HTTPS requests to a server once a minute.

This example uses a light and color sensor, the AMS TCS34725, using Adafruit’s library for it. It sends the illuminance levels in lux, and the color temperature levels in degrees Kelvin. You can replace it with any sensor you want, however.

The uid allows the server to filter out requests from clients that it doesn’t already know. Any server on a public address always gets random requests, so it’s a good idea to filter out the ones you don’t want. You don’t have to use the Arduino’s crypto chip for this. You could replace this with the MAC address of your WiFi radio or a randomly assigned unique ID number if you’re not using the crypto chip.

There are a few variations on the client in this collection:

When you’re setting up a microcontroller to be a sensor datalogging client, there are a few things to consider:

What Data Are You Gathering?

The first question, what is being gathered, will depend on your particular case, of course. The examples given here were written to gather lighting data: illuminance and color temperature. Your characteristics will vary.

When Is Each Set of Sensor Readings Taken?

It’s useful to attach a time stamp to each set of sensor readings, and it’s useful to use some time standards. The simplest solution if you’re logging sensor data to a web server via WiFi, the simplest solution is to let the server time stamp each reading. However, there may be reasons to time stamp locally by the microcontroller. If that is the case, then you want to attach a real-time clock to the microcontroller, or use a controller with one built-in, like the Nano 33 IoT or the MKR boards. The RTCZero library lets you access that realtime clock, and the WiFi libraries let you set the clock by making a network time server request, using the command WiFi.getTime(). For more on time in connected systems, see this page.

Where Was the Data Gathered?

Unless you’re using A GPS reader or some other machine-based way to determine your location, the simplest way is just to name the location in your data. Adding a parameter to your data with the location name is a good way to start.

Who (or What) Gathered the Data?

It’s a good idea to always include a unique ID in your sensor readings so you can identify the device that took the reading, independent of the location or the time.

The servers described below filter requests by checking a unique ID (uid) in the request. If the UID that the client sends doesn’t match one of the ones in a list called knownClients, the server responds with a 403 error and the data is not saved.

You’ll need to fill in a uid for your microcontroller for this to work. From the Nano 33IoT or the MKR boards, you can get a uid from the on-board crypto chip using the ECCx08 crypto chip library like so:

If you prefer not to use the crypto chip, you can use the MAC address of the WiFi radio. Here is a snippet of code that reads the MAC address, formats it into a hexadecimal string, and puts it in the data to send to the server: 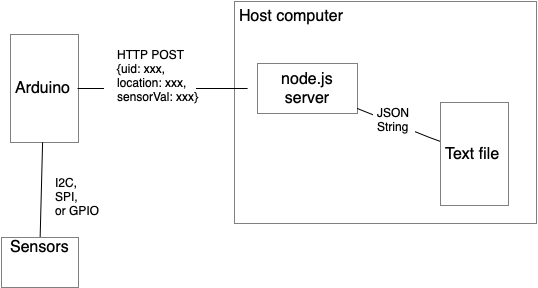 The node-datalogging-server has a RESTful API that accepts data formatted as a JSON string in the body of a POST request. The client microcontroller reads its sensors, then sends the readings in a POST request with a JSON body to the server. One version of the server writes the JSON string to a text file, as diagrammed in Figure 1.

You can also read all the records of the server by making a GET request.

You can also include any sensor characteristics that you want to add. The Arduino examples in this collection send light and color temperature levels in lux (lux) and degrees Kelvin (ct), respectively. The server doesn’t check the names of the characteristics in the JSON data, so you can add anything you want.

This server can be run on any host that can run node.js. You can see it running on Glitch.com at this link. It also includes a web-based client, as a test example.

There are two versions of the server, one of which saves the incoming data in an array, and another which appends the data to a text file. Both of these are simpler substitutes for a database. The data from server-filewriter script is more persistent because it’s saved to a separate file. The data from the basic server script will be lost when you stop the script running.

The Google Apps script in this repository allows you to save data to a Google Sheets spreadsheet via HTTP. Arnab Chakravarty has a tutorial on how it works. For more background on Google Apps scripts, see the link above, or this link which explains the web functions doGet() and doPost(), which are the main functions of this example.

The structure of the system is similar to the node server, and is diagrammed in Figure 2. The microcontroller only has to change the URL and API route that it’s sending data to, in order to send data to the Google apps script. The script takes the place of the node.js server, and writes to a Google Sheets spreadsheet instead of a text file.

What’s great about the Google Apps scripting API is that it’s just JavaScript, it lets you give your spreadsheet into a web service quickly, and it gives you everything you might need to know about a given HTTP request in JSON, so it’s easy to parse it out and put it into the cells of a spreadsheet. This lets you take advantage of all the things you can do with the data in a spreadsheet: sorting, graphing, filtering, and so forth.

Briefly, the steps to get started are as follows:

The google-sheets-datalogger script in this collection will accept both GET and POST requests. For the POST request, the data format is the same as the node.js server above:

As with the node.js server, you can also include any sensor characteristics that you want to add. The Arduino examples in this collection send light and color temperature levels in lux (lux) and degrees Kelvin (ct), respectively, and the script looks for those characteristics as names of the column headings in the spreadsheet.

The API route will depend on your script’s deployment. To get it, click the Deploy button in the script editor, choose “Manage Deployments, and copy the Web URL of the current deployment. It will look something like this:

You can see the server address mentioned above in this URL. The API route is the part after the server; in this case, it’s macros/s/XXXXX/exec. It will be different for your script. Copy it, and paste it into the route global variable in the DataLoggerHttpClientJSON or DataLoggerHttpClientJSON_redirect sketch. Now your Arduino should be able to connect to the script.

For security, Google scripts redirect to a one-time URL, generated with each new request, to respond to requests. Your HTTPS request will get a 302 response like this:

You can see that one of the headers of the response is the location of this URL. When you get that, you need to make your request again, using the server and route in the redirect location.

The script will still add your data to the sheet if it’s valid, even when it gives you a 302 response. So you can use the DataLoggerHttpClientJSON and accept the 302 response if you want. The sketch will still work with the script, even if it’s not reading the whole response.

If you want the full response from the server, however, try the DataLoggerHttpClientJSON_redirect sketch. When this sketch gets the 302 response, it reads the headers, parses the new server and API route from the location field, makes the second request to that address, and gets the response back.

For more on this, see the Google script guide on redirects.