This has been tested on MacOS Mojave.

Make sure you’ve powered the LeDMX Pro4 correctly. WS2812 LEDs run on 5V, so a 5V power supply is the right supply for them. There are addressable LEDs that run on higher voltage, like the WS2815 (12V), and the LeDMX Pro4 is also available in a 12-24V model, but this tutorial uses the 5V version.

Connect your LEDs to Universe 1 of the LeDMX Pro4 as shown in Figure 1. 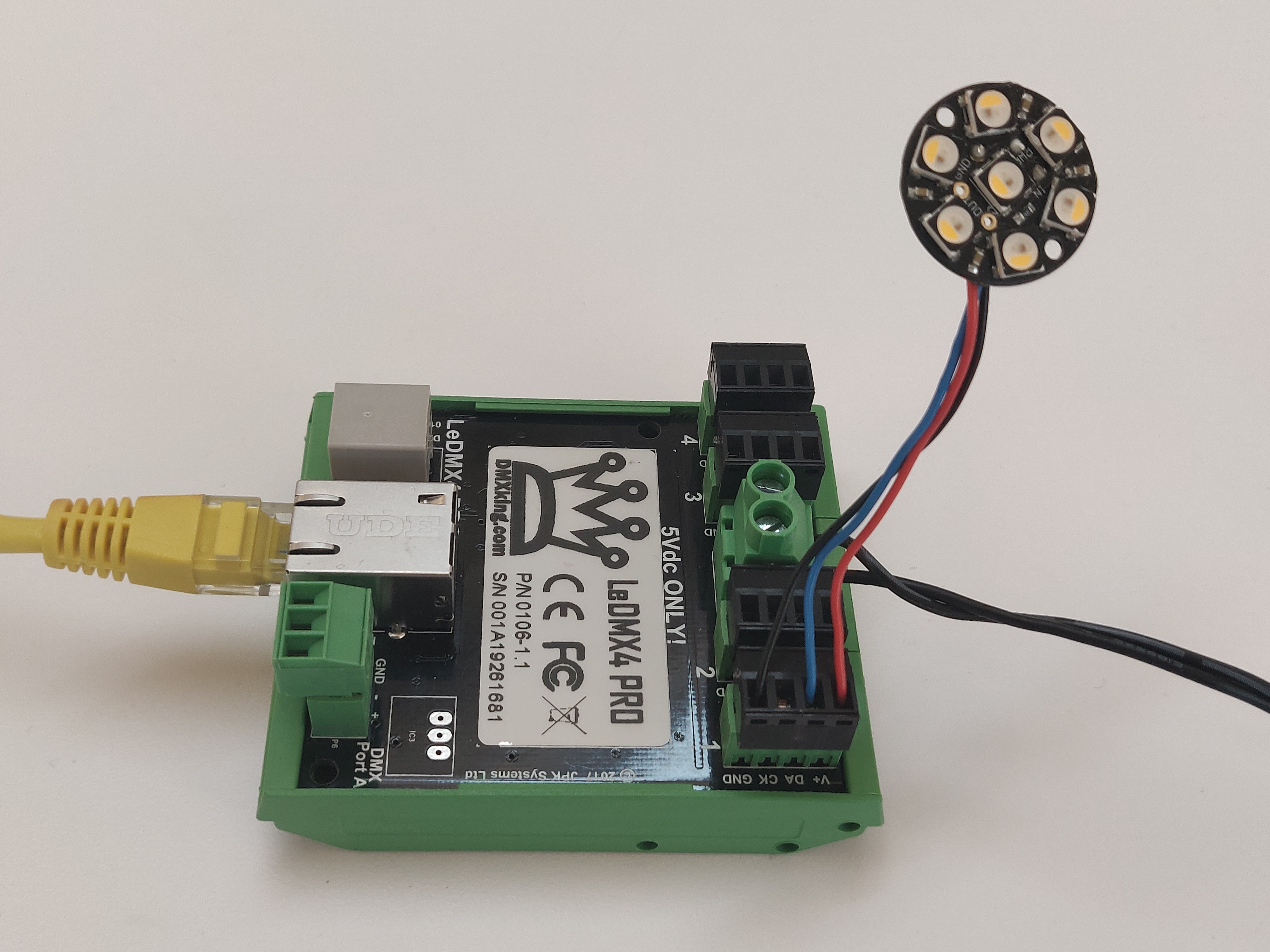 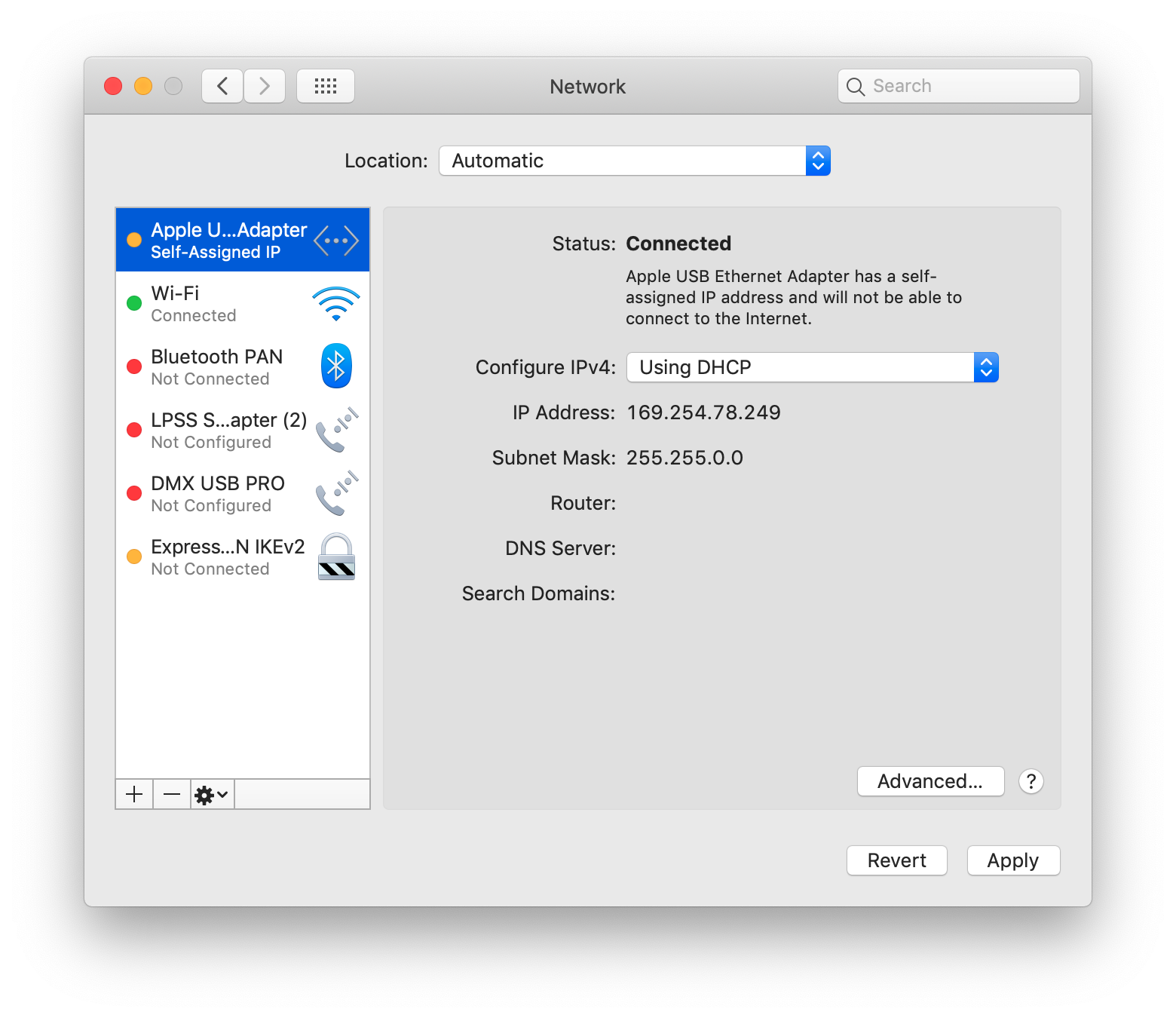 Figure 2. MacOS Network control panel showing a USB-to-Ethernet adapter, to which the LeDMX Pro4 is attached. The LeDMX Pro4 has self-assigned an IP address.

Note: you may need to use the DMXKing DMXKing eDMX1 Pro Configuration Utility to configure your LeDMX Pro4’s address. The LeDMX Pro4 is factory-configured to set itself to a static IP address in the 192.168.0.x range, yet most Ethernet interfaces are configured to set themselves to an address in the 169.254.x.x range when there’s no router present. If your LeDMX Pro4 is not showing up when you Node Scan, try the following with WiFi turned OFF so that the configuration utility only scans on the USB-to-Ethernet interface: 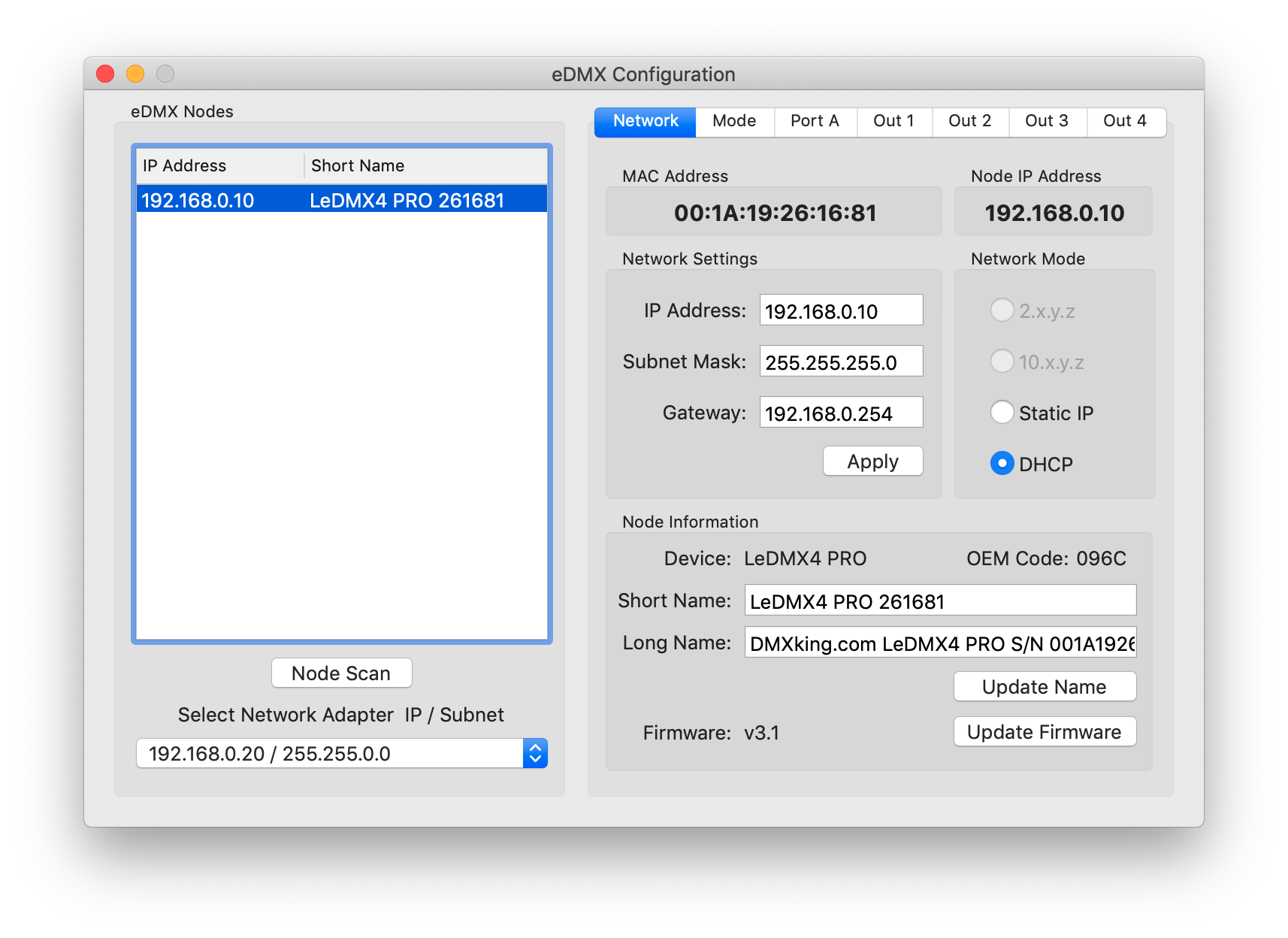 Figure 3. eDMX Pro Configuration Utility Window. Set your device to DHCP and you’ll be able to get an address on any network you connect to.

Now open TouchDesigner and add a DMX Out CHOP. In the DMX tab of the CHOP, set the interface to sACN. Then set the Universe to 1. In the Network tab, click the arrow of the Interface option menu and you should see the 169.254.x.x address that your computer self-assigned in the list. Pick that, or enter it manually. Now the DMX Out CHOP will communicate with the LeDMX Pro. 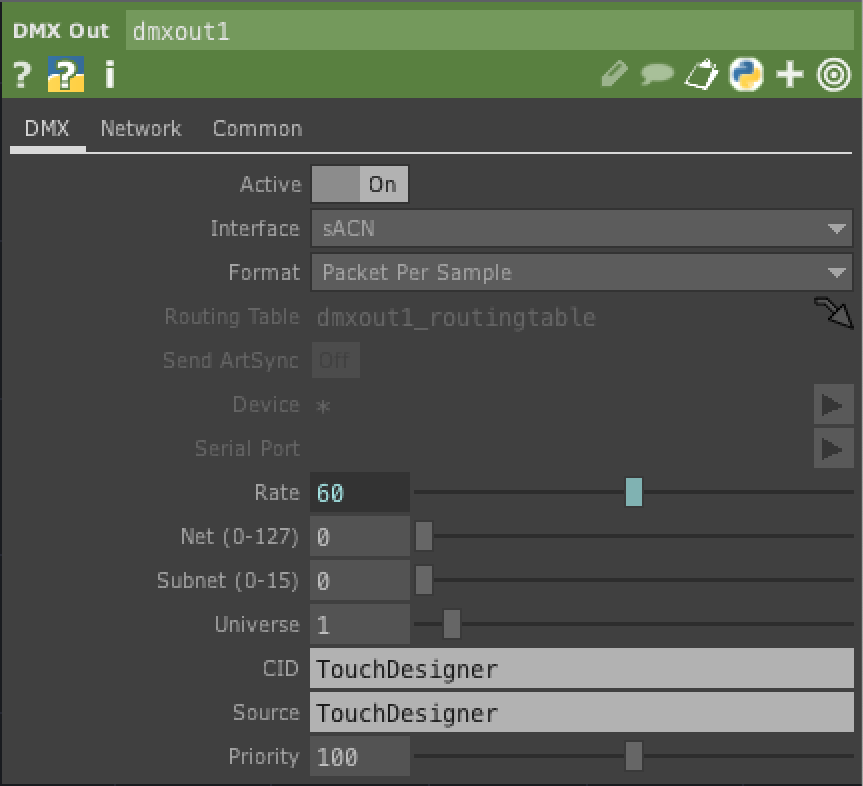 Figure 4. DMX tab of a TouchDesigner DMX Out CHOP configured for sACN control. 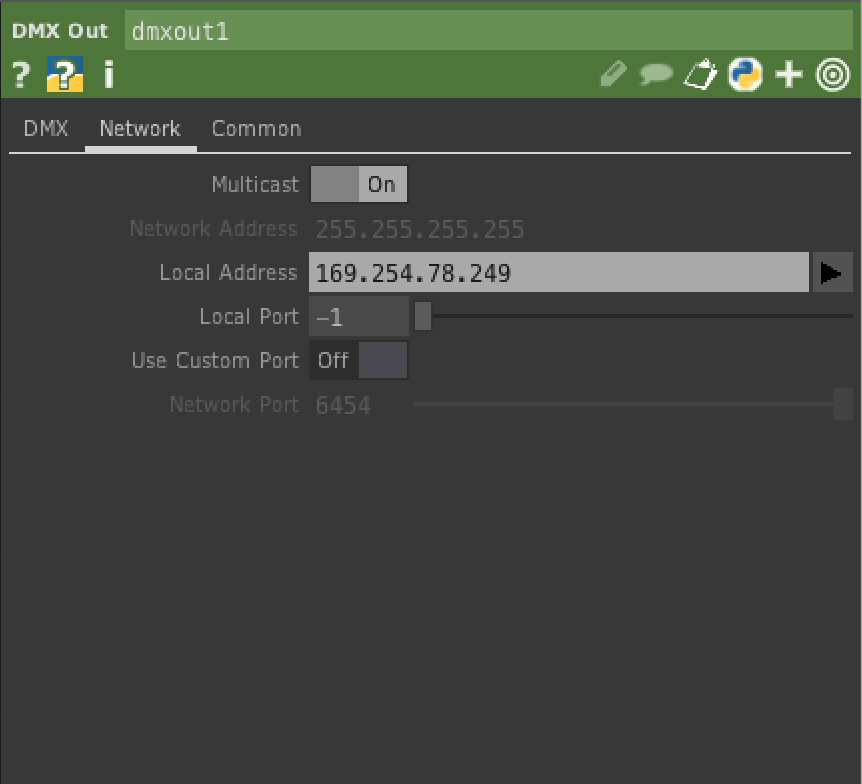 Figure 5. Network tab of a TouchDesigner DMX Out CHOP configured for sACN control. The USB-to-Ethernet’s self-assigned IP address is shown in the Local Address field.

If you’re using QLC+, open the application and click the Inputs/Outputs tab. You’ll see a list of input and output interfaces, as shown in Figure 6. One of them will have the self-assigned IP address beginning with 169.254.x.x. This is the eDMX1 Pro. Choose this as your output.

Next, click the Simple Desk tab. You’ll have a row of sliders. Slide any of them to control the corresponding DMX channel coming out of your eDMX1 Pro. 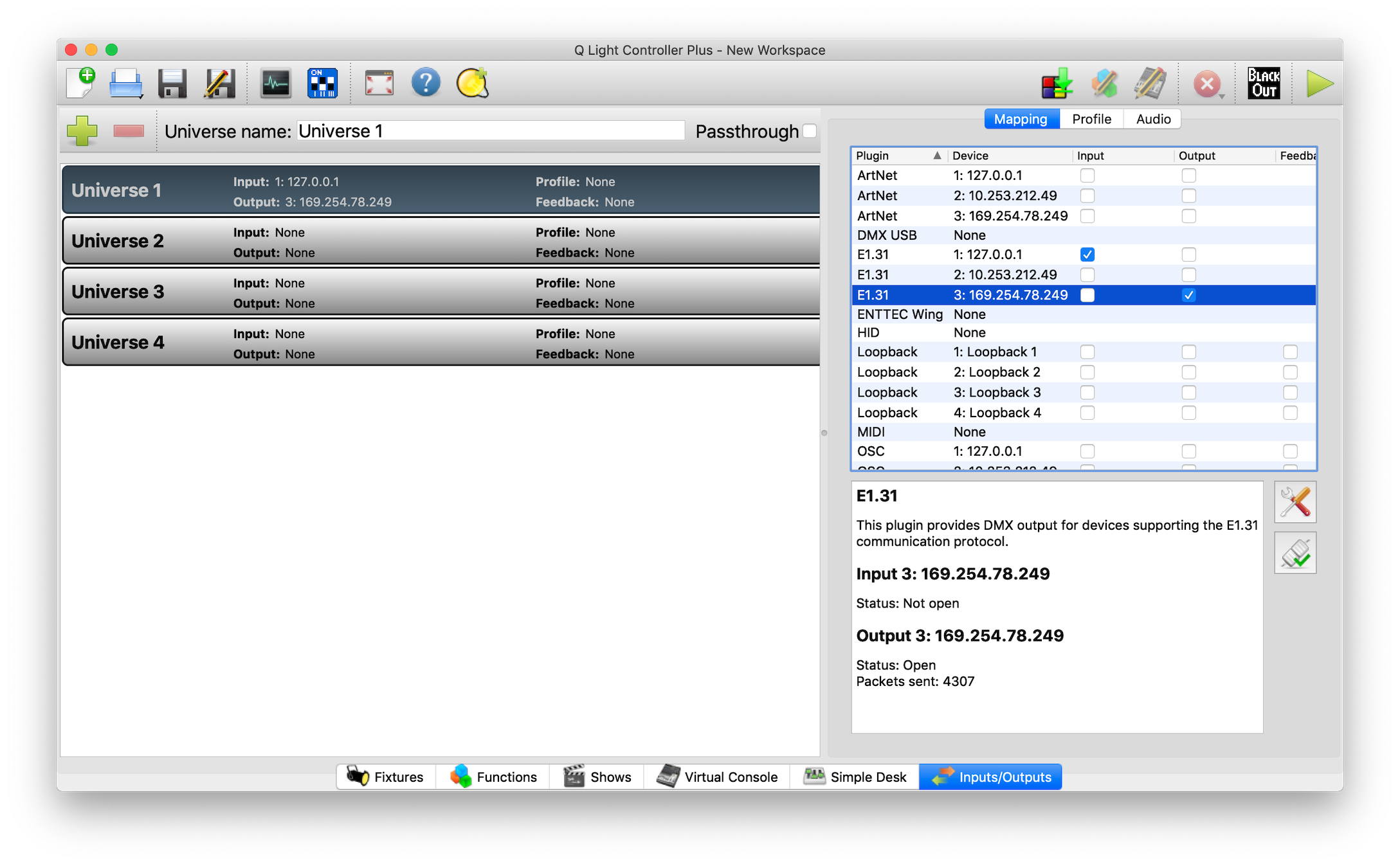 Figure 6. Inputs/Outputs tab of QLC+ showing the eDMX1 Pro on the 169.254.x.x. interface as the output. Unless you’re taking input from another program, it doesn’t matter what you choose as input.

This touchDesigner program will control three pixels of an RGBW WS2812 LED strip.